Brexit: hurrah for the Great British empire…or the economy is going to collapse and we’ll all be living off tinned ham and powdered milk by April. 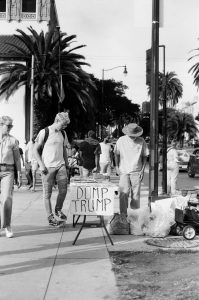 I’m yet to meet anyone who’s on the fence about either political issue — indeed international politics has never felt so divisive and I’m seeing more and more evidence on social media of businesses laying out their political leanings for all to see.

So my current pondering is: are they wise to do so?

Does politics have any place in your marketing?

It was one of my regular agency clients that set me off on this train of thought. A business consultant based in the US, he has very firm views on the Trump administration and gosh darn it, he’s not afraid to share them! He was determined to call out the president for his narcissism and admonish other political leaders for failing in their duty to stand up to what is (in his view) some truly awful behaviour from the White House.

Inflammatory stuff. And he wanted it wrapped up neatly in a blog post…

As a writer, I was thrilled — what creative wouldn’t want to have fun with such a straight-shooting client and a controversial topic?

As a marketer, however, I had to pause. Because if you’re planning to broach any potentially controversial issue in your marketing, there are a few things that you have to consider first:

What does your company stand for? What are the values that drive you? Does politically-charged content tie in with your brand or does it completely jar?

If your company specialises in renewable energy or doing business in a more eco-friendly way, then talking about political policies relating to climate change and the environment makes complete sense.

Likewise, if you’re heading up the marketing department of a social enterprise that deals with people living in poverty, why wouldn’t you pass comment on the latest government austerity measures? 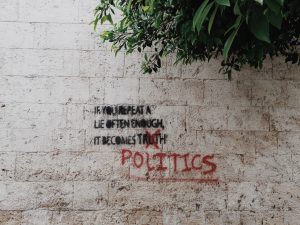 Photo by Brian Wertheim on Unsplash

The customer avatar of the client I mentioned earlier? Well, it’s safe to say that they’re not of the wall-building persuasion. In fact, he’s looking to attract the type of customer who’s going to love his anti-Trump rant – the kind of person who’ll find themselves nodding along with what he says and who’ll share his post because it ties in with their own self-image.

And that’s one of the most important things to consider when you’re creating any kind of marketing content, politically-themed or otherwise:

Who are you writing for?

Think about potential clients: what does this audience want to know, what do they want to hear and what are they likely to share with their own followers?

When it comes to sharing things on social media people tend to share things that make them look good, whether they want to be seen as cooler, smarter, funnier or whatever. Essentially, people share things that help support their self-image. So the person whose self-image centres on their liberal values, on taking a stand for the things they believe in, on speaking up for minority groups, will be queuing up to share content that feeds that image.

So before you start writing any type of content, be really clear on who you’re writing for. How do they see themselves? And what kind of content will support that self-image? 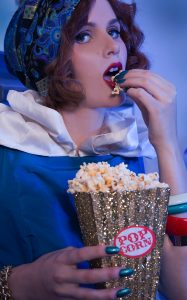 Why are you considering getting political with your content?

If you’re getting political purely to court controversy, it’s probably not a great idea. If you’re heading down the path to click bait, stop right there! And if your political affiliations are dictated by trends rather than your own values, you’re heading for trouble — we’ve all become far too good at spotting BS.

In my client’s case, the rant against the US administration was only a small part of the article — it was a timely and relevant springboard for a wider topic that fits in perfectly with his content marketing strategy. And as is the rule with any form of content, it still provides his readers with tangible advice, relevant to them.

If you’re planning a potentially controversial piece, make sure you can say the same. 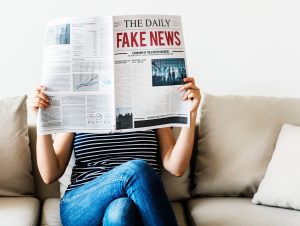 Beware the echo chamber…
Photo by rawpixel on Unsplash

If you’ve read the first three points and you reckon you’re safe enough to go ahead and share your politics with your audience, there’s just one more thing I want you to consider before you start creating:

The power of the echo chamber.

When I took to Facebook with my musings on my Trumpian blog post and whether it was cool to get so political in marketing, there was one comment I found really interesting:

“Probably a safe bet…yet to find an actual pro-Trump person in real life…but they must exist?”

Well, yeah, they certainly do exist. And there are probably many more of them than we realise.

We spend so much time with our friends (who likely share many of our political views), reading our heavily filtered social media feeds and relying on the news outlets that most closely align with our beliefs that it’s easy to forget that we’re not all on the same page politically. There are plenty of folks out there with opposing views; people who may decide not to do business with us, people who might call us out and openly challenge us.

Our echo chambers give us a false sense of security when talking about politics.

So when you’re creating any type of controversial content, be aware that you’re probably wrapped up quite warmly in your cosy little echo chamber (I know I am!), and that by putting that content out there, you’re stepping into the fray.

You’d better be up to the challenge!

I’d love to know what you think? Are you happy to wear your political heart on your content marketing sleeve or do you keep business and politics strictly separate?

If you need someone to help you out with your own content marketing strategy and write those ( blog posts for you, give me a shout. I live for this stuff!